This page is all about what we know of the history of our Triumph TR4A IRS. Starting with the heritage certificate. Interestingly, when it left the factory it was destined for Swindon which is where I bought the car many years in to its life. So it looks like it was a local car. Please scroll down and watch the films of the owners telling their stories of DMW 903C. The video below is Harry Liddell, telling his story of owning DMW 903C as the first owner. 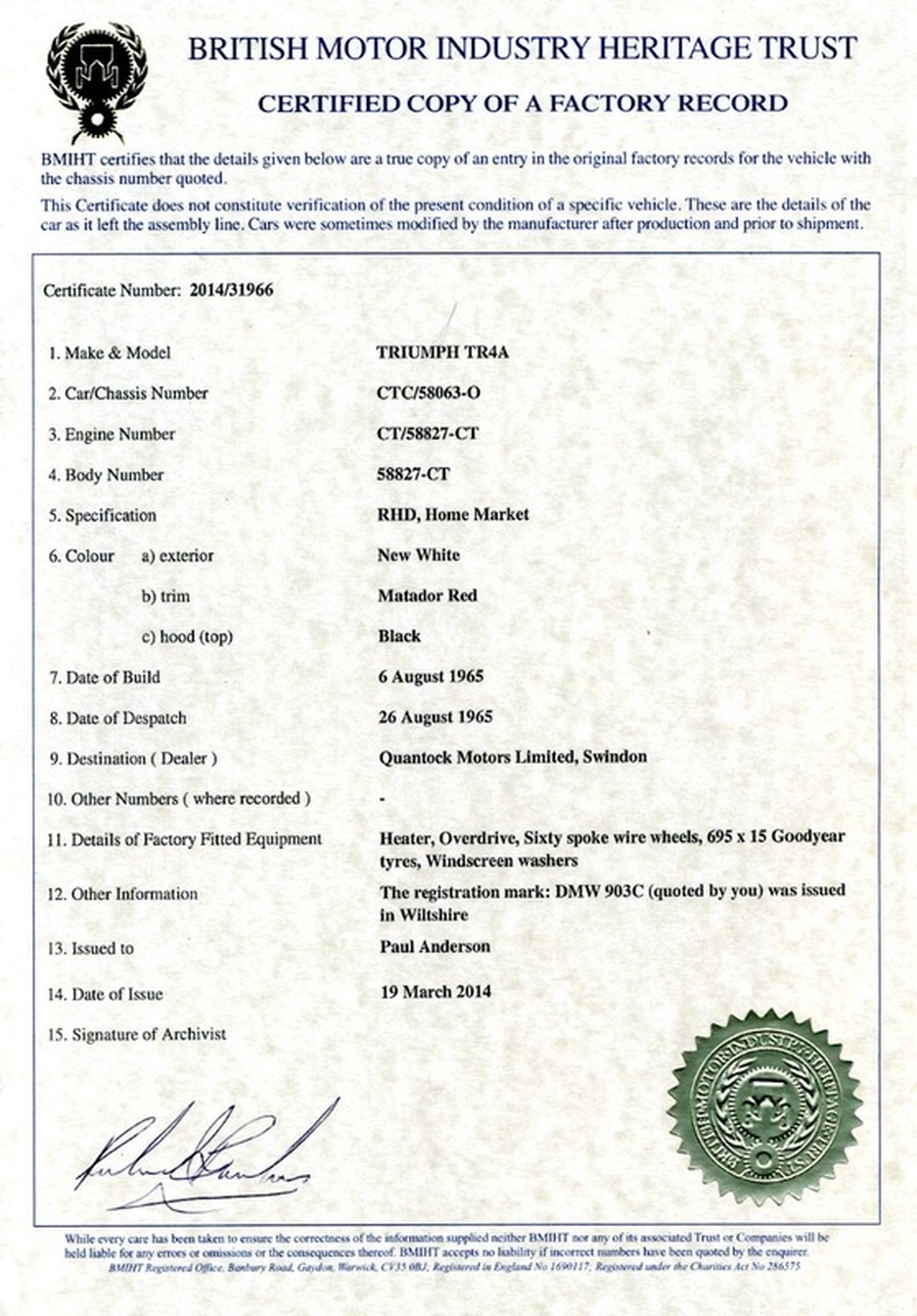 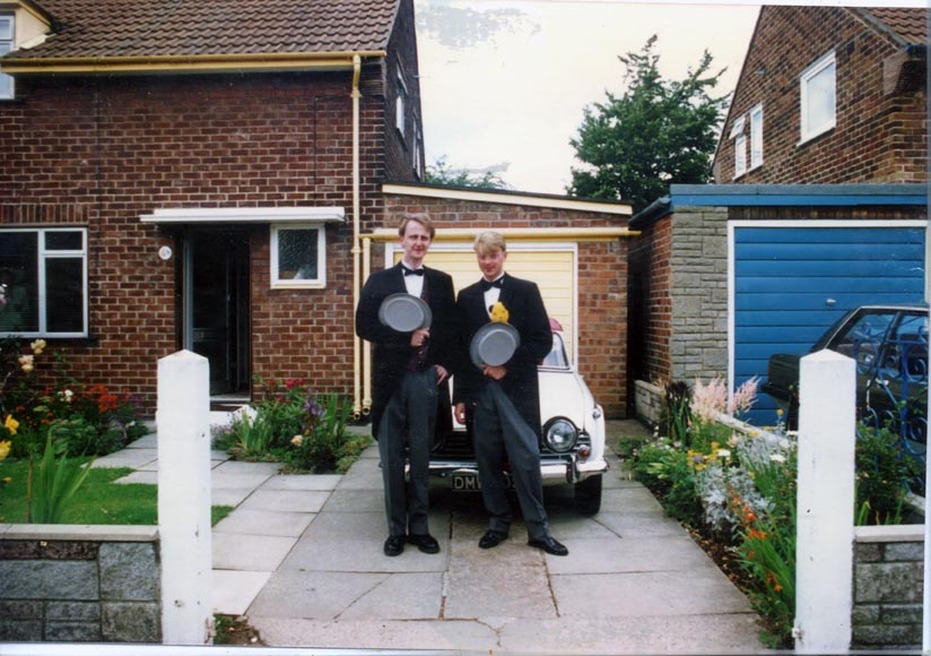 Same guys, Same car, 23 years apart.John and myself at our respective weddings. 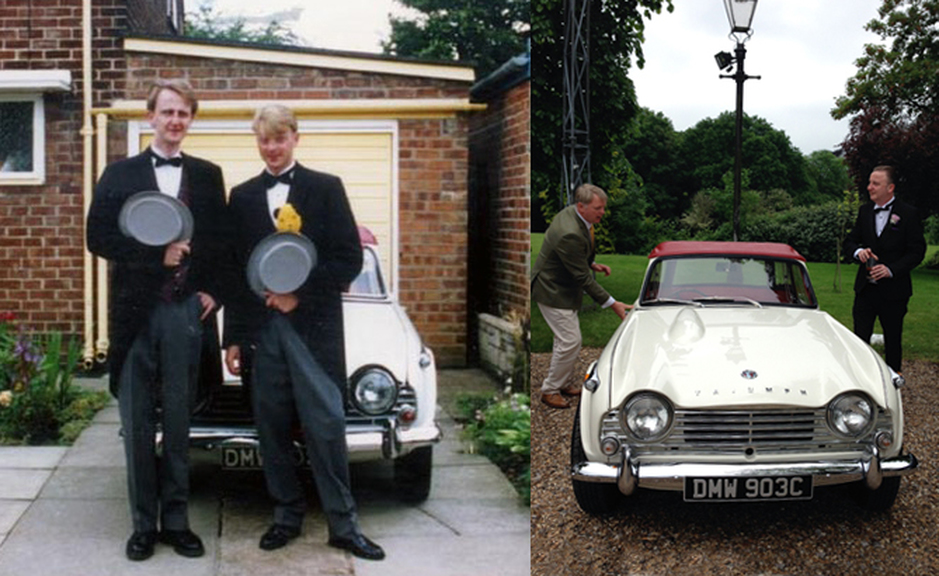 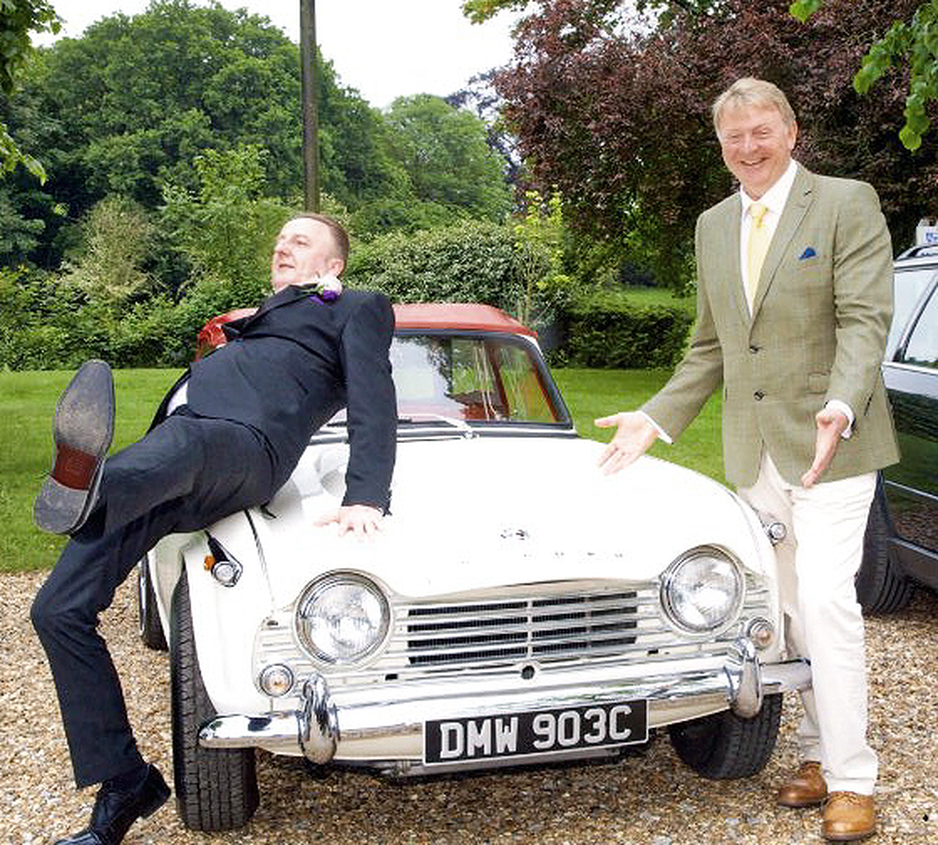 This is another picture from our wedding day. Ginny Stevens and Nadia Thompson, 2 very good friends of my wife Susannah and our TR4A. 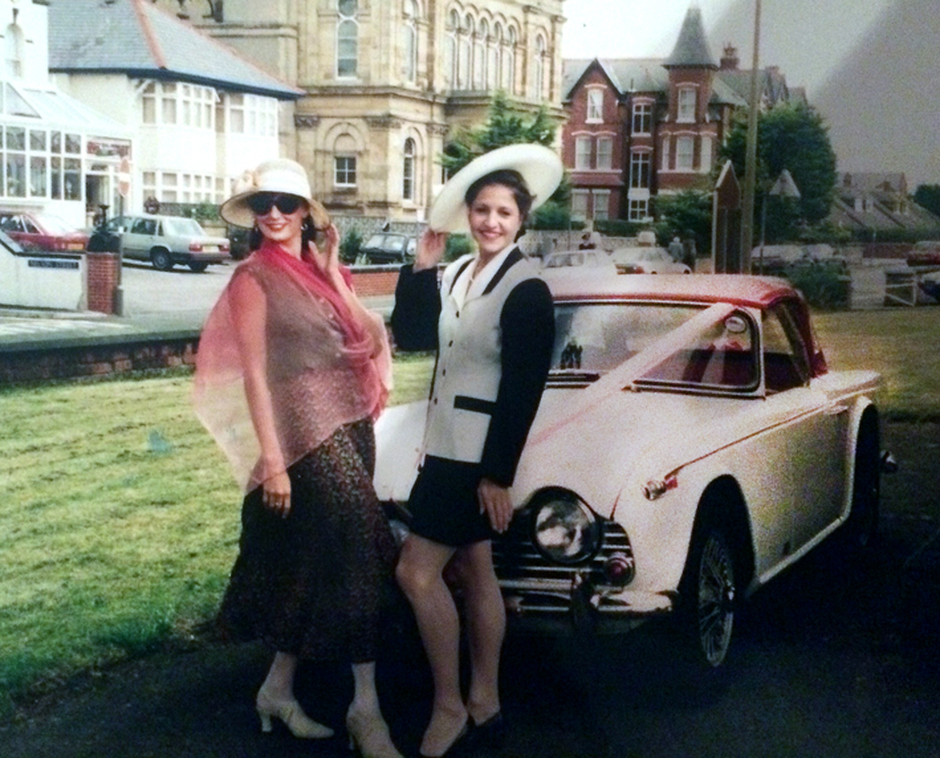 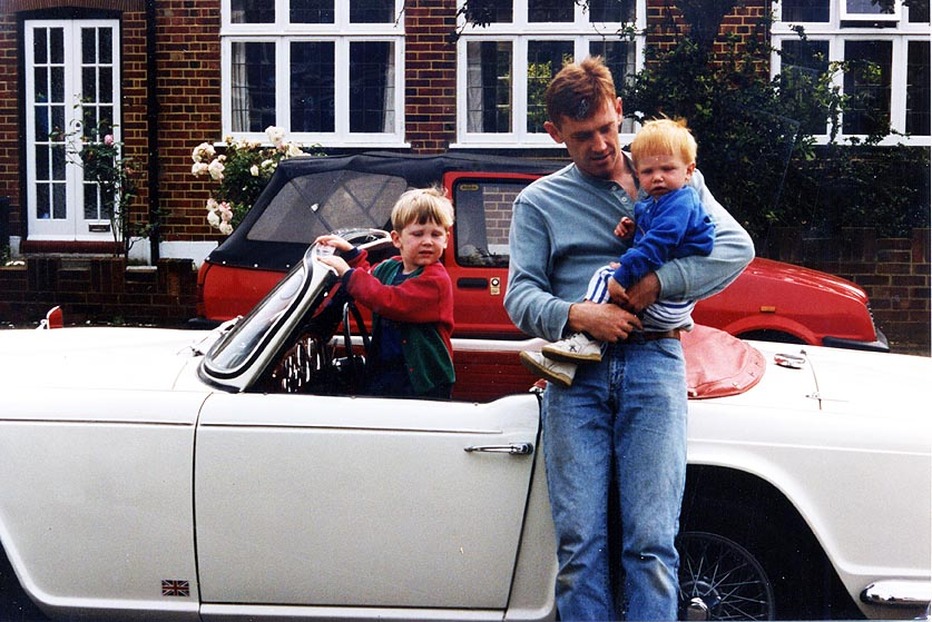 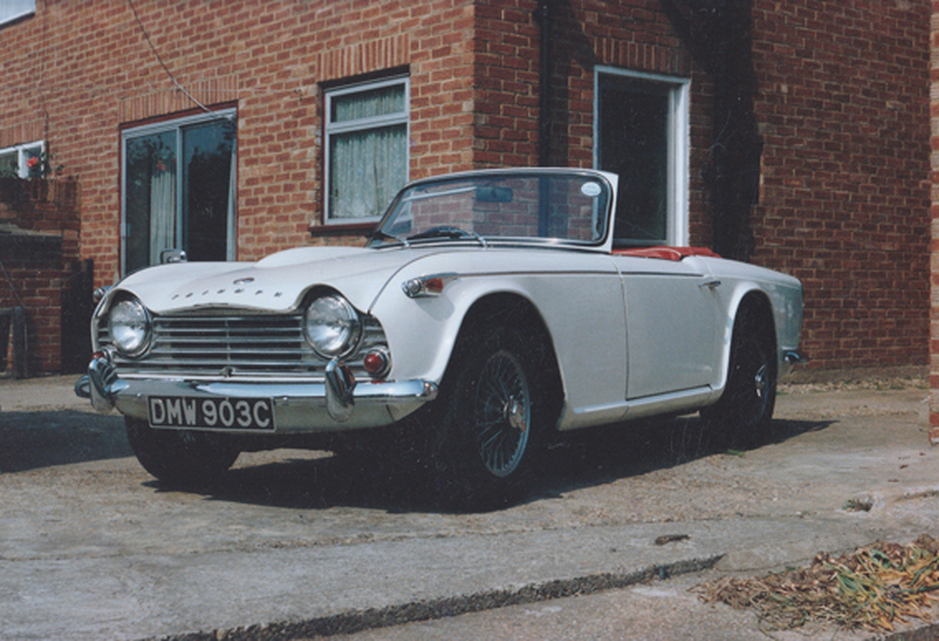 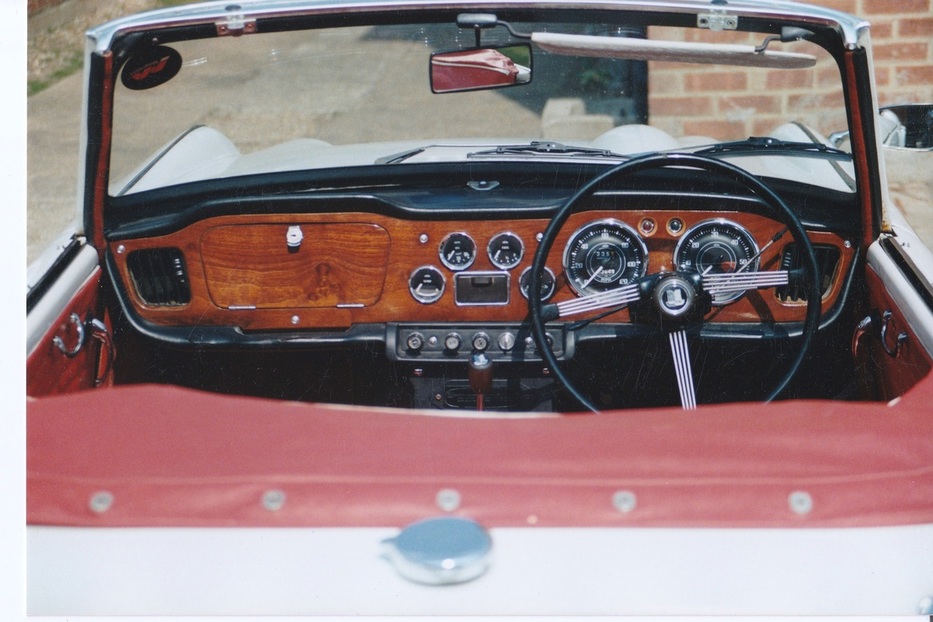 Below you can see the restoration of DMW 903C as completed by John Toll in 1981 - note the American AMCO front bar. 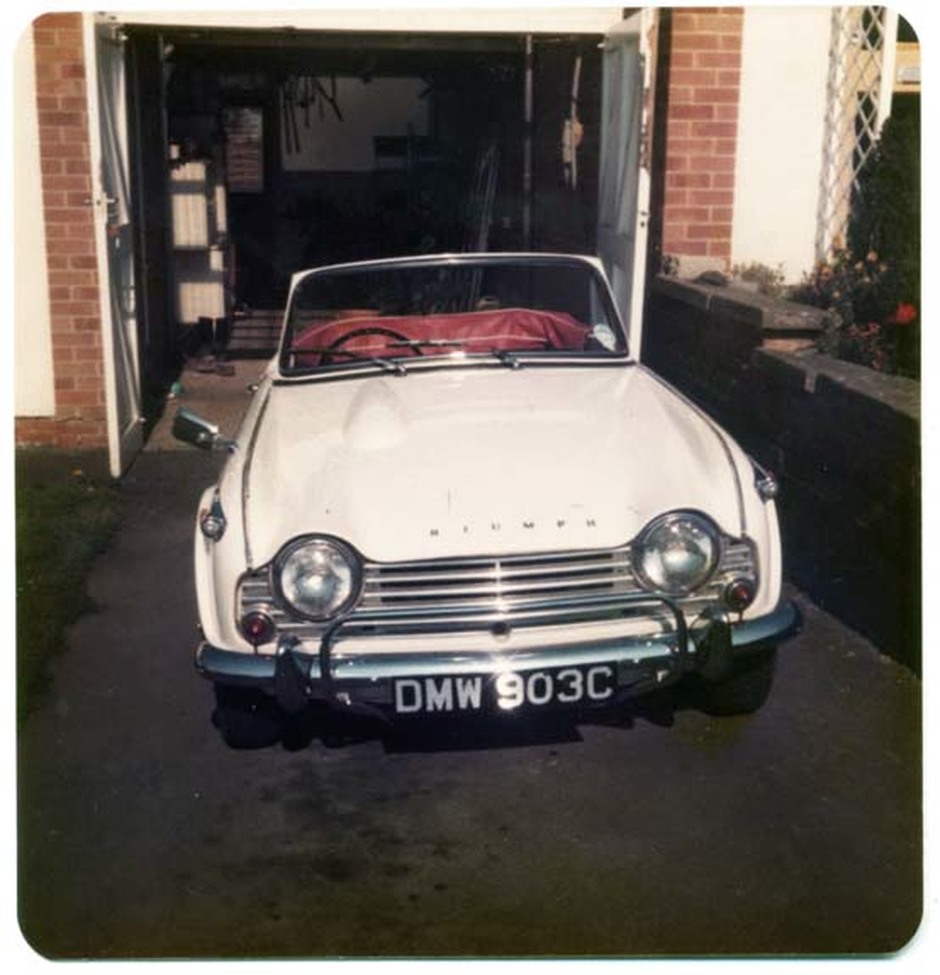 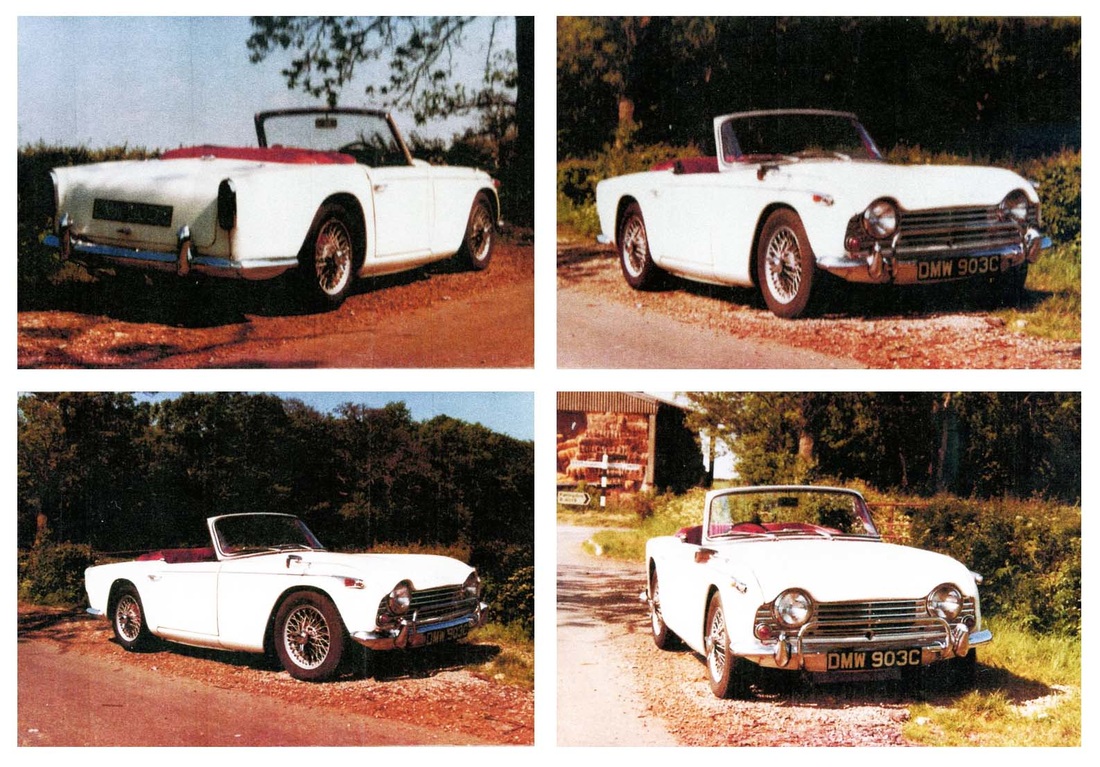 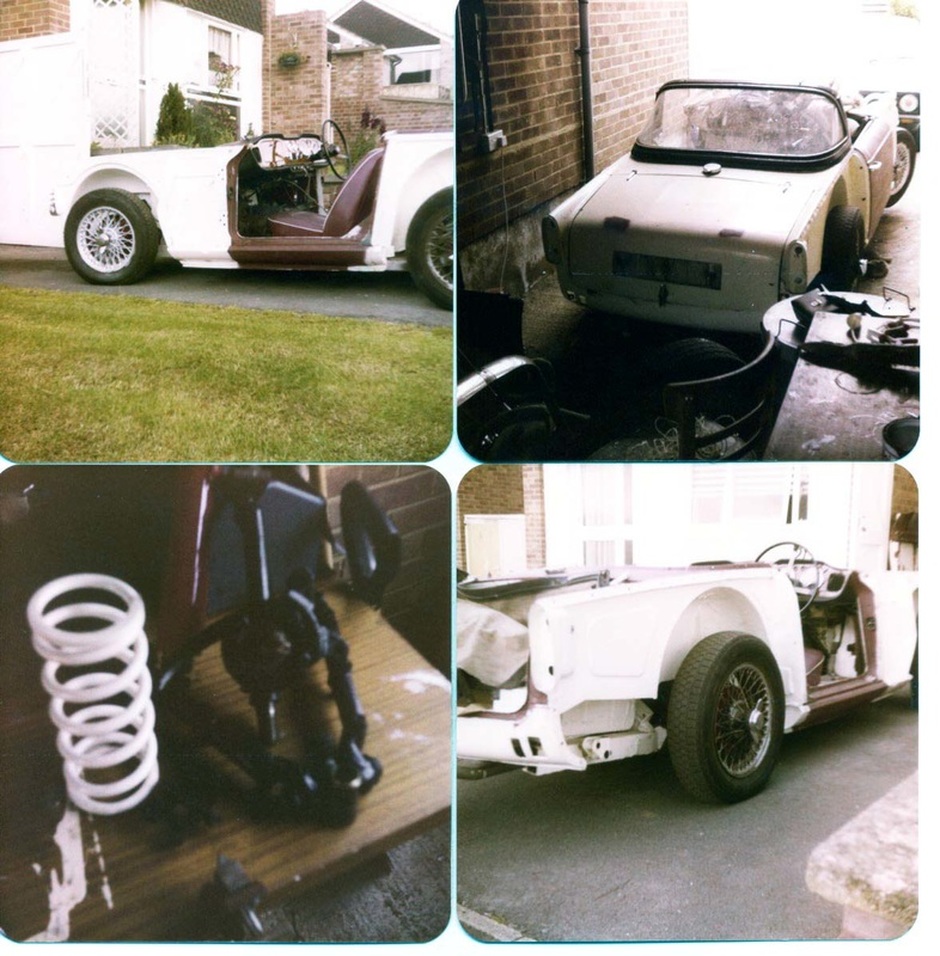 The documented restoration by John Toll - The receipts.

Thank you to Simon, the third owner of DMW 903C surprised my by sending a whole large envelope of receipts that had been handed to him when he bought the car of the second owner John. As I went through them, it was amazing to see the companies John had turned to for parts and services. Notably, John Skinner who has now supplied 2 interiors to DMW 903C, The TR Shop in Chiswick, London who have supplied many parts for my restoration and lately provided the AMCO bumper bar.  Pictures below show the receipts wit a few links to the suppliers now. 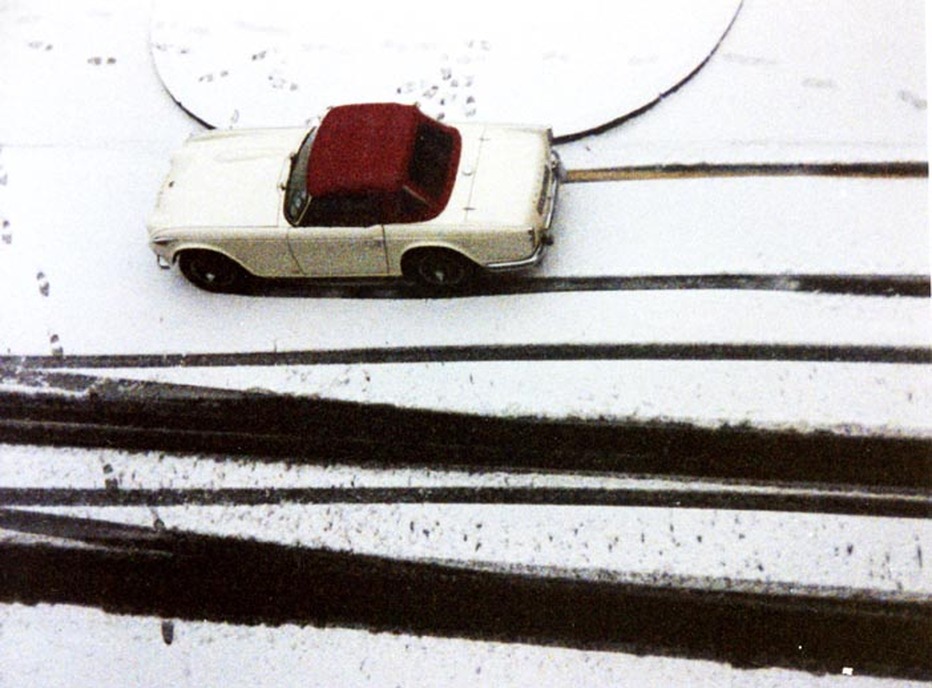 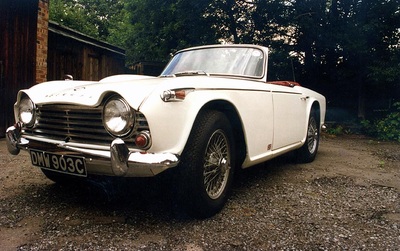 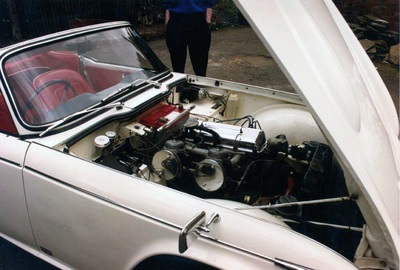 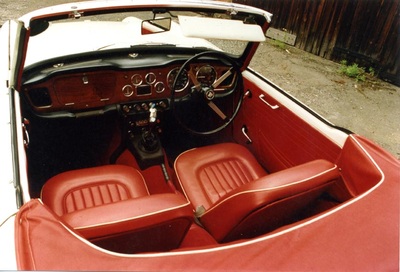 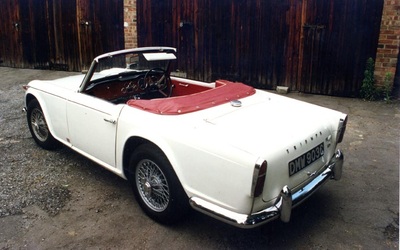 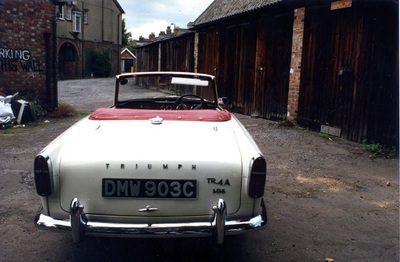 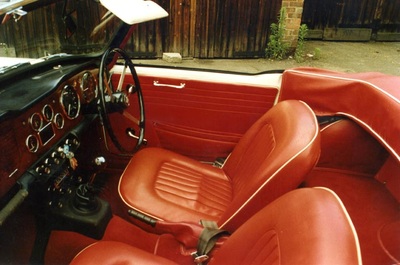 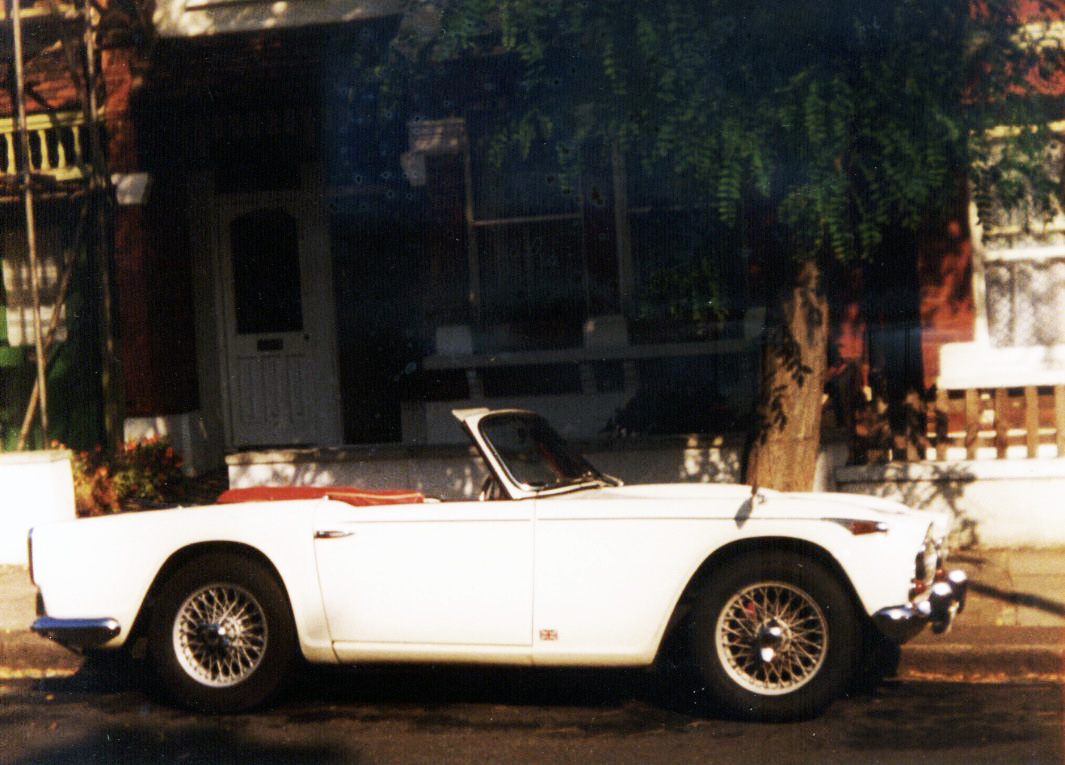 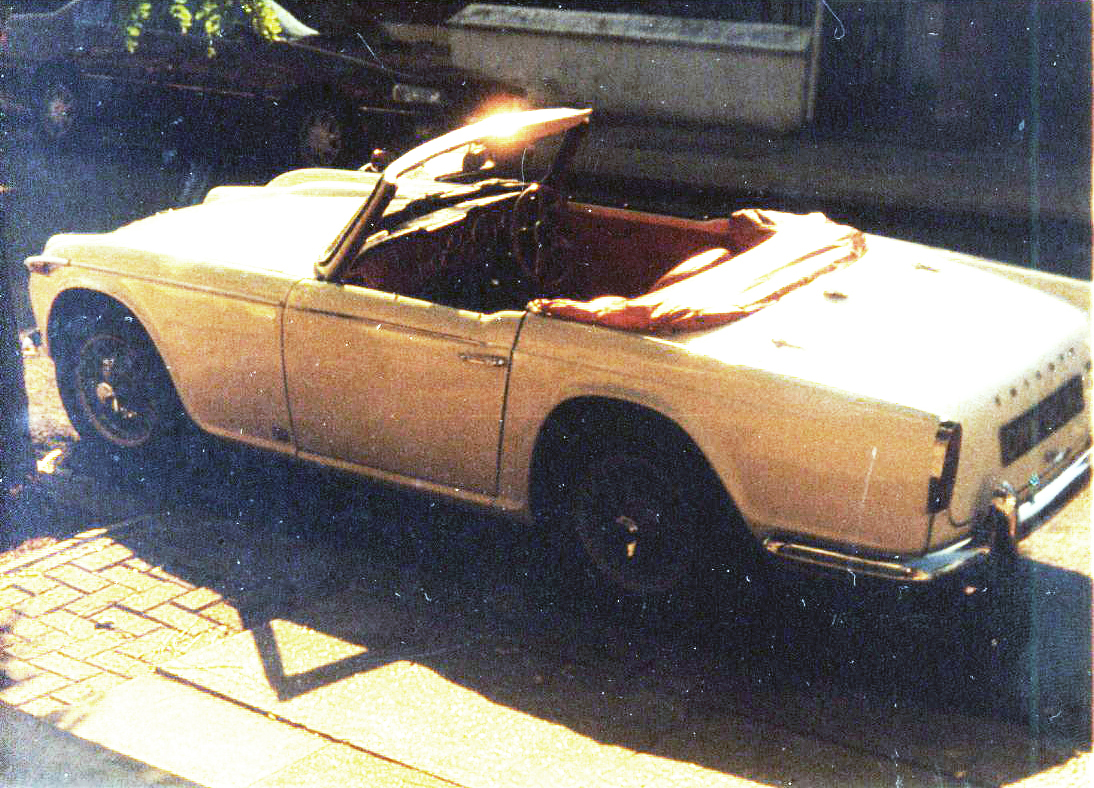 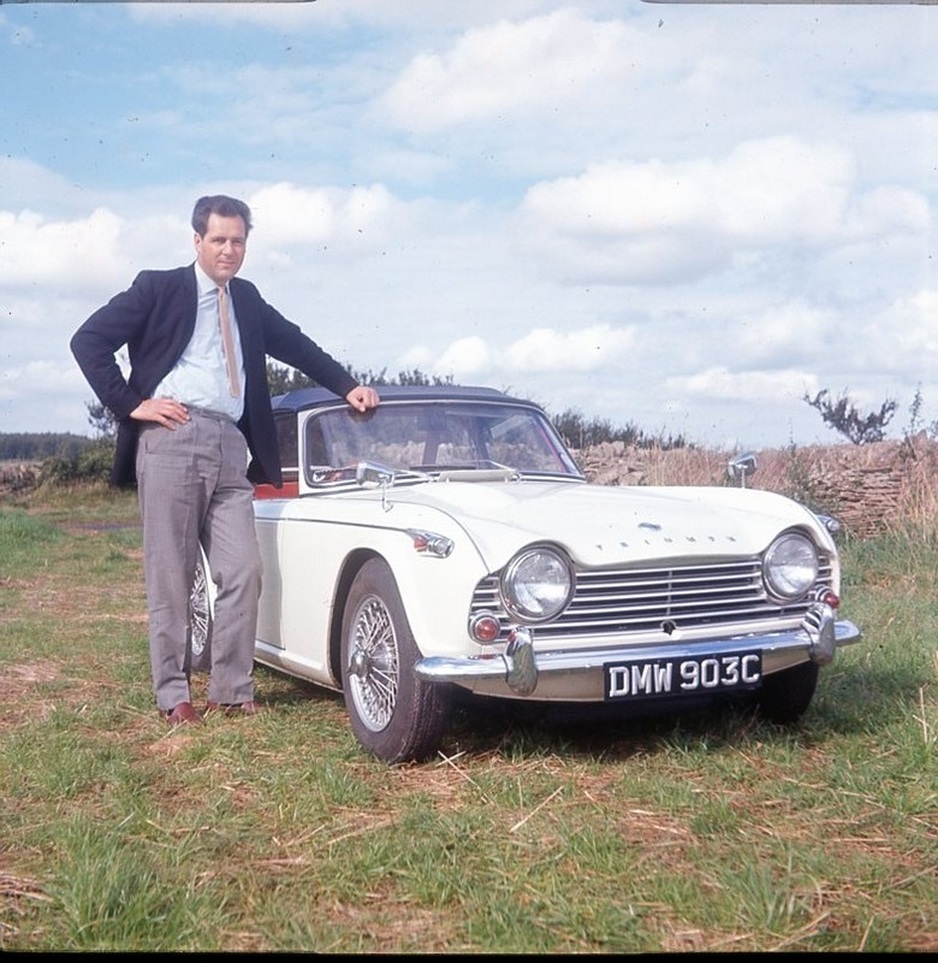 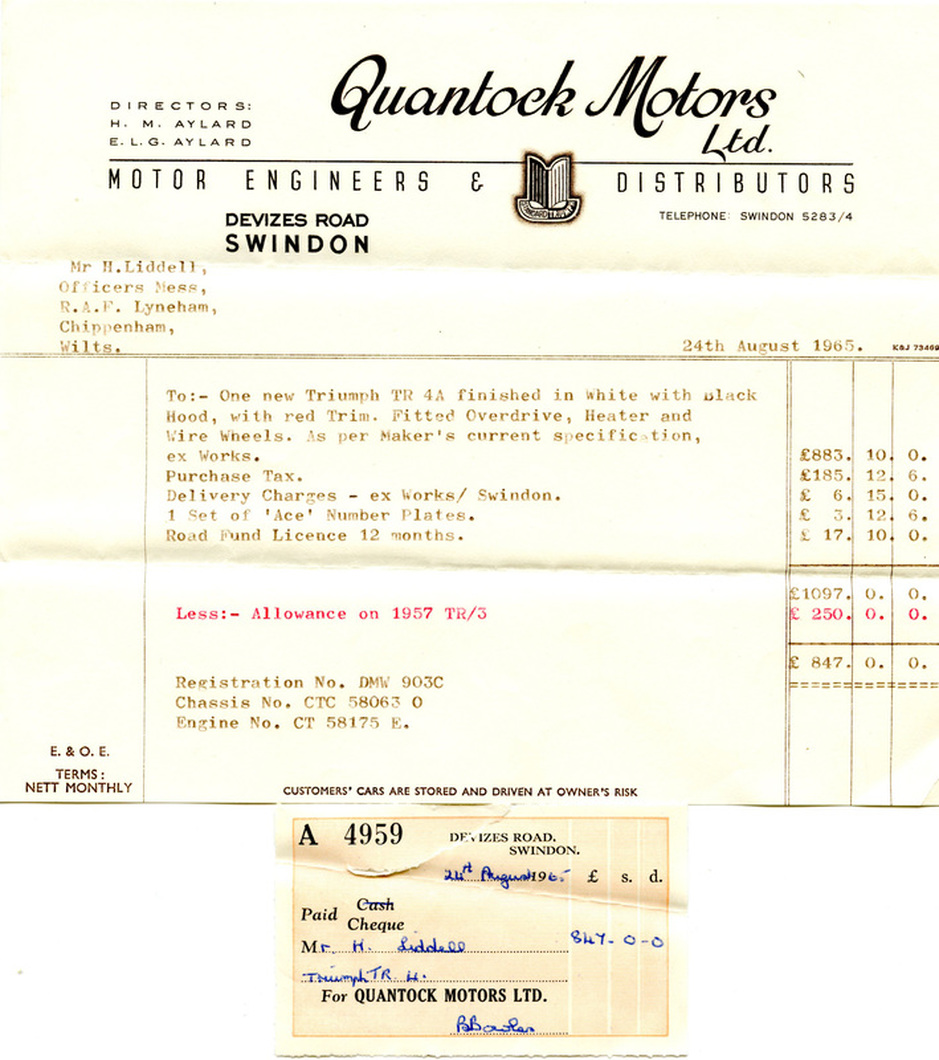 Below you can see the original Triumph Warranty for DMW 903C - given to me by Harry Liddell. 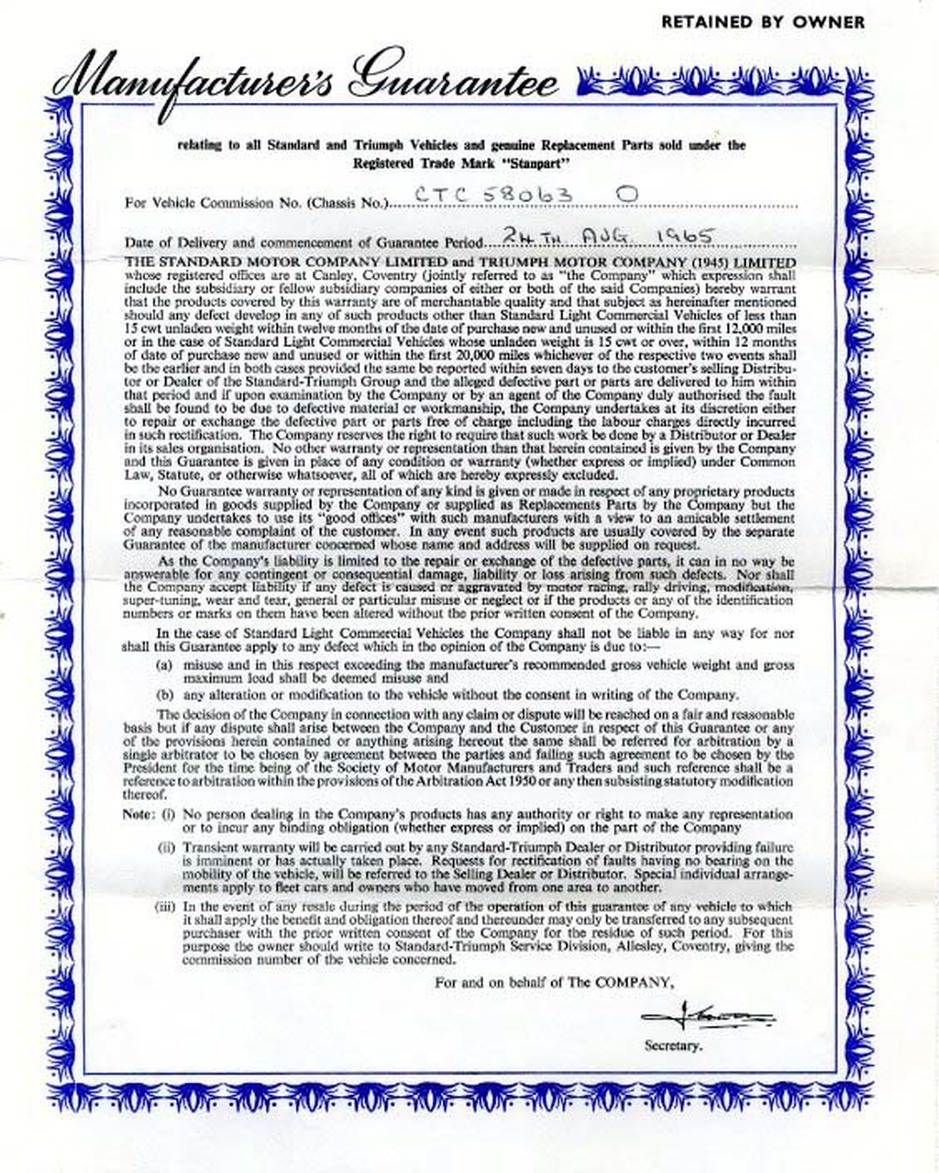 There were a number of minor problems during my (Harry Liddell) first few years of ownership – considerably more than with the previous TR3, but fairly typical of the bad period our motor industry was going through at that time. Indeed, for starters the car left the factory with an inoperative overdrive that took the dealer a few days to fix while other problems are listed below in (more or less) chronological order:

One rear tyre found to be marginally smaller in x-section than the others, with noticeable effect on handling. A letter to Sir Donald Stokes produced profuse apologies and of course a new tyre of the correct size, but one does wonder just how this sort of thing could happen? Anyway all the original Goodyear cross-plies were replaced by Michelin X ASAP, not difficult as they wore out extremely quickly.

Another wheel problem. Shortly after expiry of the warranty I noticed a peculiar softness in the left rear suspension but which in fact was down to all the spokes in that wheel being slightly loose, and a check on the other wheels showed they all had several loose spokes too. So they all in turn went off to a specialist repairer, after which there was no more trouble aside from the additional expense of having to buy a sixth wheel to cover the spare position.

Fairly early in the car’s life I was much bothered by a metallic chattering noise when accelerating, emanating apparently from the region of the gear lever; it occurred only in the lower gears and was distinctly unpleasant, though apparently without mechanical significance as performance was unaffected. Quantock Motors were eventually able to fix this, though I now forget what the cause was.

Around 1968 a failed linkage joint rendered the rear nearside damper inoperative, resulting in the car being almost undriveable until it was repaired.

Something never cured was rainwater leaks in the scuttle area; and, as the car necessarily lived outside, it was a constant chore to have to remove the ‘carpets’ and underlay to dry them out; hope you or a previous owner have been able to fix this!

Two other annoyances were the exhaust’s short life (two years max as I recall), and the ragtop’s similar short span of a year or so longer. Later on the dreaded tin worm showed itself, the boot lid especially decaying badly; can’t remember if I replaced it, if not I’m quite sure someone else has – and possibly a good deal else!

However, on the credit side the car never let me down and was unfailingly reliable aside from that damper linkage episode. Routine maintenance apart the engine remained untouched, aside from the constant struggle to keep the carbs balanced and I parted from it with sincere regret; however I had no option as both son & daughter had come of driving age, and neither a TR nor our other car (Audi 100) were suitable for the learner/just passed stages of a young driver’s life.

Harry, the first owner of DMW 903C and I keep in touch. It is always great to hear from him. Harry reads this website and it jogs his memory on certain aspects of TR4A DMW 903C.  Below you can read what Harry had to say.

Factory handbrake on TR4A was NOT the fly-off type.

Steve Long, a previous owner said, " I also got rid of it (The TR4A) because it was too hard for the wife to drive. She found the large wheels a bit too much for her as it was very heavy at low speeds. I also found her sitting in it for half an hour once as she couldn't work out how to release the ironically named 'quick release' handbrake ".

Harry noted re the above comments on the handbrake, " It seems to imply that the car was fitted with a fly-off handbrake, which was definitely not the case when I had it; was it subsequently modified by another owner? (We think the second owner John Toll did the handbrake modification) I am quite certain on this point, as I recall being disappointed on taking delivery that it had one of the normal sort, unlike my previous TR3 which did have a fly-off. On complaining I was told (can't recall by who, probably the salesman) that with previous models there had been many complaints from American customers, many of whom seemed unable to get their heads round this peculiar English version of a parking brake; and, since the US was considered Triumph's main market, the brake was altered accordingly. I can quite believe this, as I remember being surprised (and annoyed) when noticing that later versions of the Triumph 2000 for the UK market had the wipers set for left hand drive, leaving a large unwiped area for the unfortunate driver to peer through. This was presumably done on a wrong-headed idea of reducing factory costs, but  I think that any manufacturer treating its home market with disdain deserved to eventually fail - as they did". He added. "Re the handbrake, I wish I had been able to do a fly-off mod as to my mind it is much preferable to the normal unit, to say nothing of latter-day abominations such as the foot-operated type or (even worse) electrical." 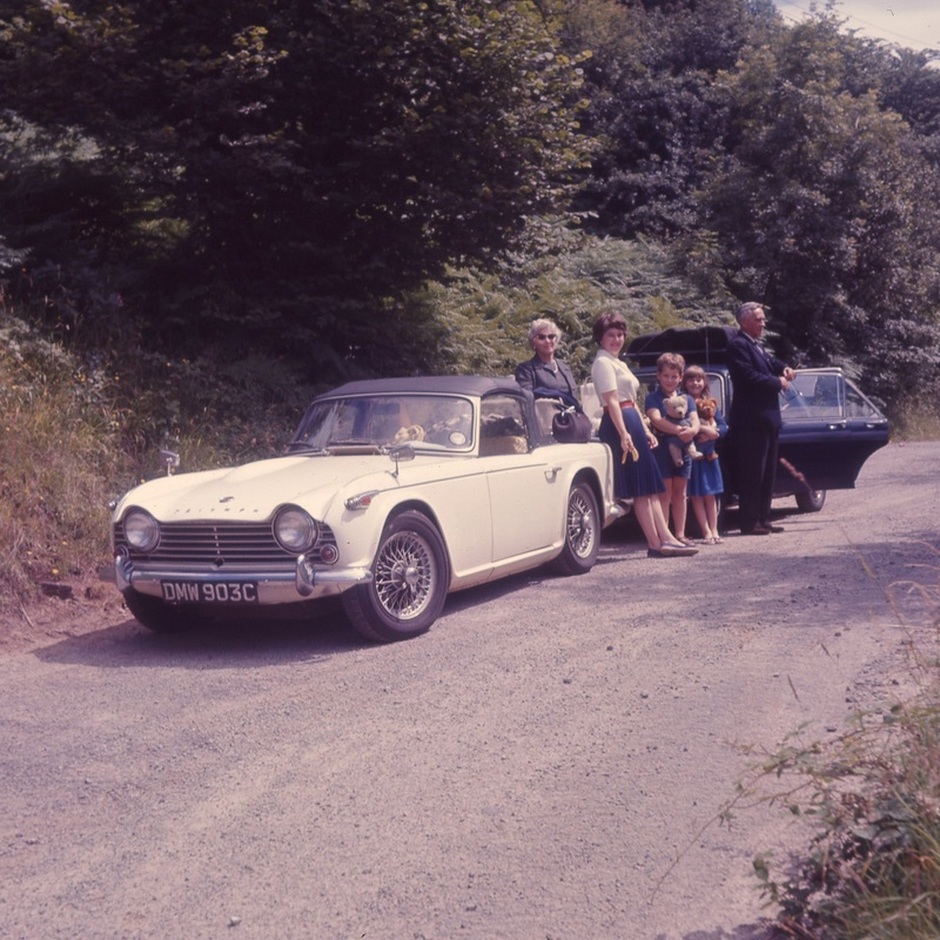 Harry came across this additional picture taken near Brecon during summer 1966. "Taken  en-route to a brief holiday at Tenby with our then other car (Austin Princess 1100) carrying most of our baggage on its roof". 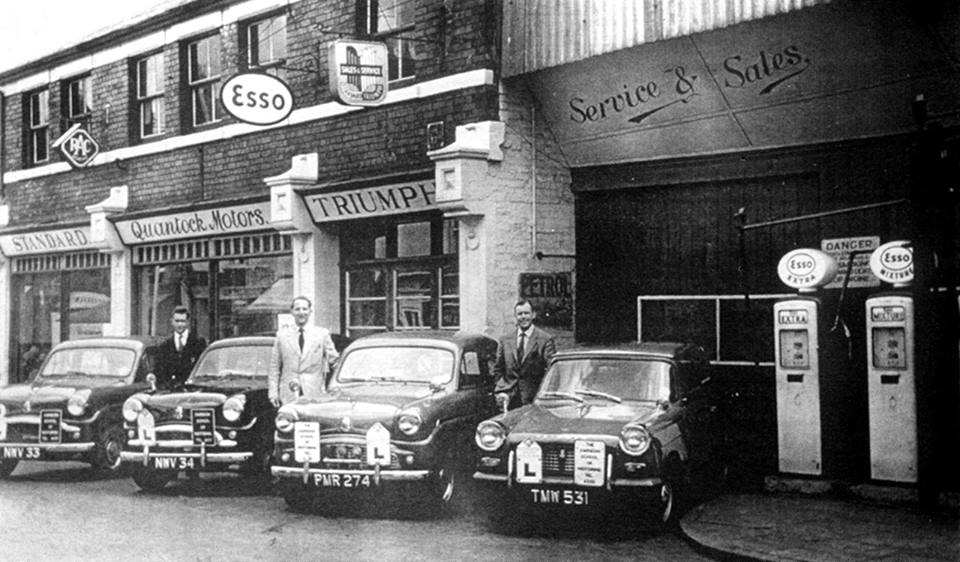 Quantock Motors in the late 1950s and below as it is today (2016) The shapes where the display windows still clearly visible.
A very early picture of Quantock Motors, Swindon. 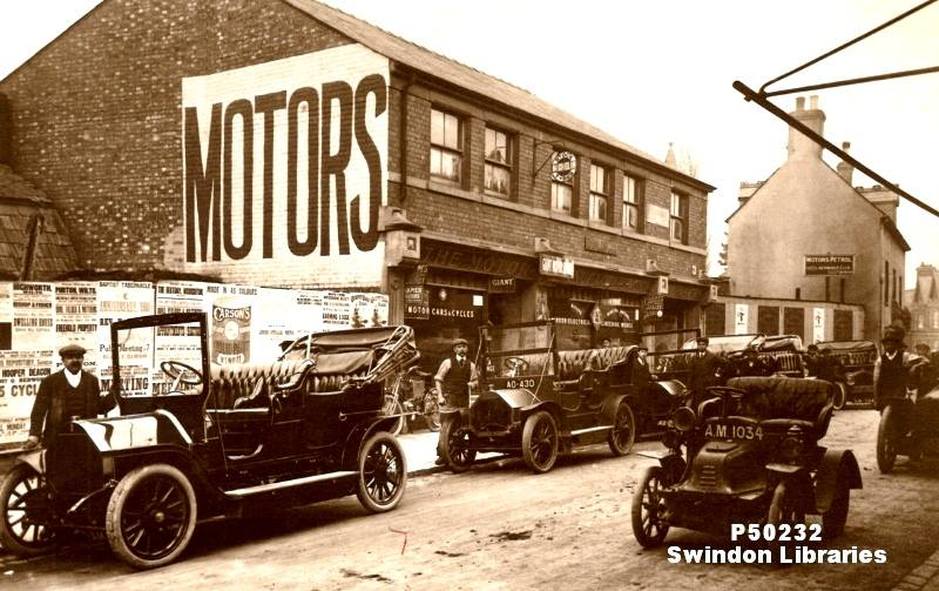 The correct Heritage Certificate with the correct matching numbers 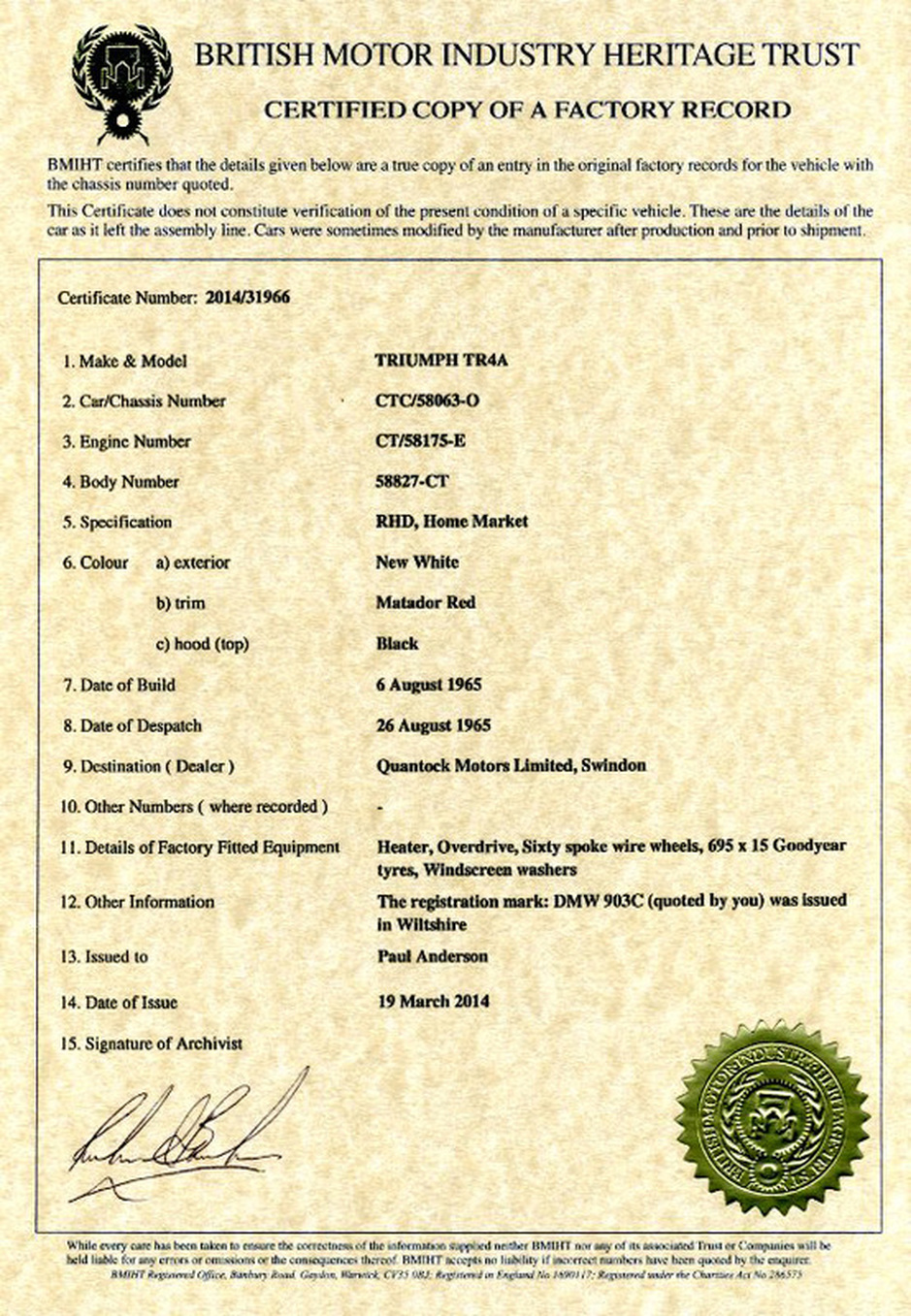 Fifth Owner Steve - The guy I passed the car on to

The 6th Owner Nigel - We got the car back from him